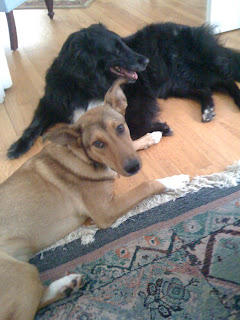 As others have noted, living with more than one dog means more opportunities to observe dog behavior because you can watch the dogs interact.  Over the past two months, it has been really interesting to watch Katie and Arlo figure out how to play and just generally be together.  Arlo is gradually learning how not to send Katie away.  (Jumping on the big dog's head, nipping, barking = big dog leaves.)  In calmer moments, he's content to lay near her (notice how in the above photo, his paw is just touching hers?) and if he's not too much of a pest (read puppy), Kate will let him.  Hard to say for sure what Kate's body language above indicates.  Her head turn  might be because I'm standing there with the camera (her usual response to being photographed unless I've got food), or it might be because Arlo has gotten a bit too close.


* * *
It's probably not obvious from the above photo, but Arlo has gained about 6 pounds since he came to live with us.  He still looks like a puppy, with his parts not quite in proportion--he just looks like a really big puppy.  We've been taking some training classes, and I think he's doing great with basic behaviors, and even a couple tricks (I'll post videos soon).  Interestingly, the more he learns, the more he learns about learning.  In just a short time, he's gone from a dog not too excited about training, to a dog who regularly offers behaviors.  Like Katie, he dances around now when I pull out the clicker.


* * *
I've been trying to think of a graceful transition to my next topic, but I'm not coming up with anything.  So let me just close by saying that this is the final Paws for Thought post.  I've started a new blog here, mainly so that I could change the title.  I'll still be writing about the same things.  Thanks to my friends for reading PFT, especially early on when I was new to blogging.  Hope to see you at the new place. :)
Posted by Knitting B at 3:31 PM 2 comments: 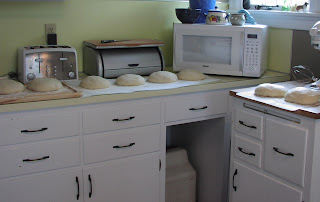 My sourdough starter has gotten out of control.  I hate to throw it away, so every week I feed it and, unless I make bread or pancakes, I end up with more!  I made eight loaves of bread yesterday, and barely made a dent.  I even gave some away last week!
Posted by Knitting B at 7:39 PM 5 comments:

Email ThisBlogThis!Share to TwitterShare to FacebookShare to Pinterest
Labels: Bread 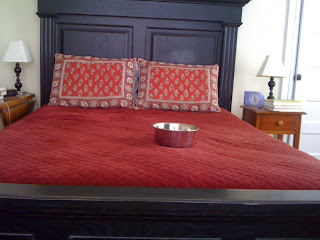 Imagine my surprise when I discovered this empty food bowl on the bed.  Any idea how it got there? 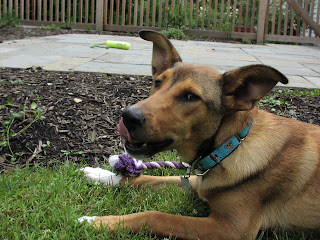 Arlo continues to make himself right at home, and we continue to be impressed with his social skills and easy-going, laid back personality.  Last week he spent a couple afternoons with me in my office, where--after snagging some treats from our secretary--he curled up on his blanket and enjoyed a long nap. 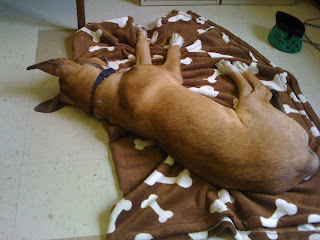 Over the weekend, we did a lot of entertaining,  and I was interested to see how Arlo would behave with new people in the house.  When guests arrived on Friday, I had both dogs outside in the back yard.  My thought was to avoid the potential for chaos at the front door.  Katie isn't a problem when guests arrive, but I wasn't sure how she'd be with another dog around, and there hadn't been an opportunity yet for Arlo to greet people at the door, so I didn't know how he'd behaive either.  Rather than give them the opportunity to practice bad behavior, then, my plan was to avoid the possibility all together.  In addition, with people coming to the house, I had a perfect training opportunity.  So I left a note on the front door inviting people to come to the back yard and also asking them not to pet Arlo unless he offered a sit.  The humans did a fabulous job, and Arlo responded appropriately.  As I think I've mentioned, he's not normally a jumper, but I thought he might be overly excited with so many new people around.  I think he tried jumping on the first guest, but when that didn't work, he gave up.  Good boy!

Although Arlo seems very mature to me for his age, he really is just a puppy.  And one of his puppy habits is that he follows us from room to room--just in case, you know, we might be doing something REALLY INTERESTING.  Even though I know he'll probably grow out of this, it's kinda flattering for now.  Here he is "helping" me change the sheets in the guest room by squeaking his squirrel. 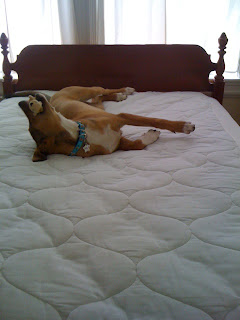 Arlo and Katie are continuing to work things out, and I'm proud of both their efforts.  Arlo is of course dying to be friends with Katie who is still mostly ignoring him.  Once in awhile she'll interact, but she seems to avoid getting him all worked up.  Probably a smart idea since he's an enthusiastic player and Katie is beyond that kind of thing these days.  When Arlo is calm, though, she doesn't mind him laying nearby. 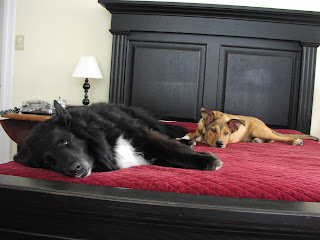 As we get to know Arlo better, we have a better sense for when he's most active and, consequently, when he'd do better playing with us than pestering Katie.  As I'm learning from Managing a Multi-Dog Household (a terrifically helpful e-book from Whole Dog Journal), the key to a happy 2-dog household is good management (backed up, of course, with solid training).

Training over the past week included more sit-to-say-please, down, stand and touch.  On leash, squirrels are his biggest challenge.  He's so interested in them that he can't pay attention to anything else.  I've been using penalty yards to get his attention (backing away from the squirrel until he looks at me, then reinforcing attention to me with hot dogs).  This is working okay except that I don't like putting pressure on his neck when I back up, even when I move slowly.  So I'm going to order him a Sense-ation Harness.  Probably, squirrels are going to be the biggest obstacle to eventually letting him off leash.  The good news?  The very healthy squirrel population around here means we have lots and lots of opportunities to practice. 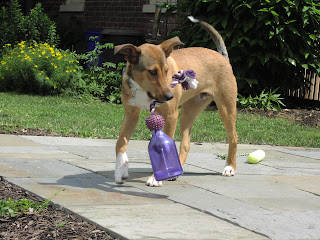 ETA:  In the first photo above, Arlo is wearing his new, spiffy collar purchased recently from Nola and Spencer, my new favorite place for dog collars.
Posted by Knitting B at 10:04 AM 9 comments: 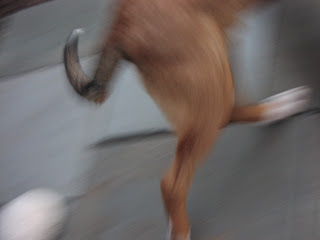 Arlo's first week with us has has gone pretty well.  As he becomes more comfortable, we're seeing more of his personality.  He's a little more rambunctious than when he first arrived which isn't surprising.  But I have to agree with his foster fam, who told us that after some healthy activity, Arlo is perfectly happy to settle down for a nap.  In fact, that's what he's doing right now, and that's why I have time to do some writing.

Although we've missed the critical period for socialization (the period roughly between 3 and 13 weeks when dogs are most open to new experiences), because of his beginnings, I suspect he may have had exposure to  more people, dogs and experiences than many dogs.  Still, to build on what he's already learned about the world, I'm taking every opportunity I can to continue introducing him to new stuff.  So this week in addition to daily walks, Arlo and I went for several car rides, and we visited the vet, campus, our local strawberry festival, the farmer's market, and my friend Melanie's farm.

On all of these outings, he was a model dog.  I know I keep saying this, but for a 6-month old puppy he shows very good impulse control.  He rarely jumps on people, for example.  And he's pretty good about keeping a loose leash.

Until today, I've been walking the dogs separately to get a sense of Arlo's behavior on the leash.  Yesterday for the first time Andy and I took both dogs for a walk.  I was worried that Arlo might pester Katie, but except for sometimes grabbing her leash, he was pretty good.  This morning, Katie, Arlo and I went for a walk with our friend Bob and his dog Quinn.  Kate and Quinn are old pals and walk together often.  Arlo introduced himself to Q. with typical puppy enthusiasm which Q. discouraged right away.  So Arlo tried again much more respectfully.  Good puppy.

It wasn't as difficult as I thought it might be for me to walk Katie and Arlo together.  They both did a nice job of keeping loose leashes.  What I discovered, though, was that I kind of missed having that one-on-one time I get when I only have one dog with me.  Morning walks with Katie--and now Arlo--are part sniff walks, but also part training.  And I can't do that when I have two dogs to pay attention to.  So for the near future, morning walks are going to be single-dog walks--first one dog, then the other.  I'll just get up a little earlier.  And the extra exercise will be a good thing.

But I still want the dogs learn to walk together,  so I'm going to try short walks with both of them every day or two, and be very generous with rewards for checking in.  We'll see how that goes. 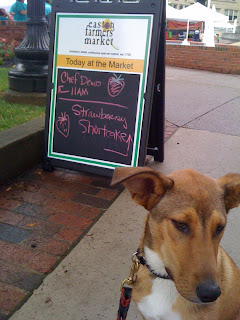 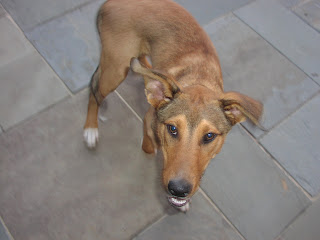 Meet Arlo, a 6 month old collie mix, and the newest addition to our family.  He's been here since Monday and is settling in nicely. 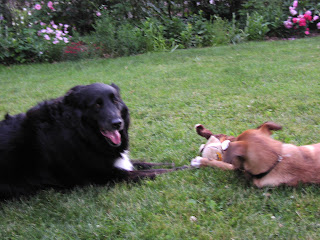 Arlo hails from a shelter in Kentucky where he was brought in as a stray, and he came to us through the Collie and Ibizan Rescue of Central New Jersey.  In spite of a rough start, he is remarkably sweet natured and well socialized.  I'm guessing most of that is probably due to the good foster care he had before we got him. 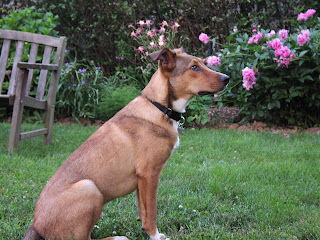 At 6 months, he's mostly legs and tail.  And big adorable ears.  Since he arrived, he's been getting to know the neighborhood.  He's relatively new to walking on a leash but surprisingly good at it.  And he was a perfect boy in the car yesterday and at the vet's office. 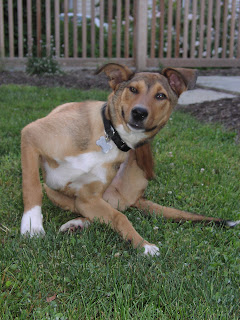 Like other pups his age, Arlo is a quick study.  Already this week he's learned that good things (his food bowl, greeting new people and dogs, access to the back yard, etc.)  come to dogs who sit. 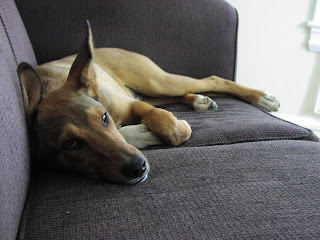 Starting tomorrow, we'll be going to training classes, and I look forward to writing more about that on this blog.  Until I do, here's one final image from Arlo's first day.  Notice the ears.  He was intently focused on some squirrels in the bushes. 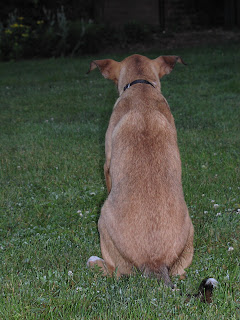 
Gino and Rocky feasting on a bit of lettuce that's fresh from the garden.
Posted by Knitting B at 1:16 PM No comments: